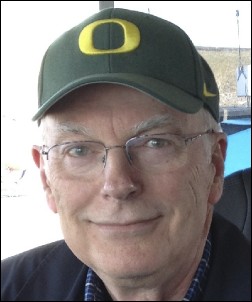 My Personal Testimony and Life Journey | A Memoir

• I was born in 1943 to a Catholic family in Yonkers, New York. Dad was an FBI agent-in-training. Mom was an at-home mother of two — my older brother Tom and me. Later came my sister Kathy and brother Dennis.

• I grew up mostly in Virginia, then lived from age 10 through high school in Connecticut. After four years at St. Basil's Prep, then four more at Boston College, I completed an MBA at Santa Clara University. Some years later I earned a Ph.D. in Church Administration from Trinity Theological Seminary.

• I have always had a love for aviation, so it was a natural thing for me to join the United States Air Force after graduate school. I was an officer in USAF from 1967 to 1971, completing my service to my country with the rank of captain. Although I was not an Air Force pilot, during those years I earned a Commercial Pilot license, with multi-engine, instrument, and float plane ratings, along with an FAA Certified Flight Instructor license. Still pursuing my love for aviation, I worked as an FAA air traffic controller in Anchorage, Alaska, from 1971-75. In 1975 I made a major change and entered full-time Christian ministry, retiring (or, as I like to put it more descriptively, "retiring from office hours") 31 years later in 2006.

• At about age 9, while living in Falls Church, Virginia, I began to develop a heart for the Lord. All in our family were practicing Roman Catholics. I can recall, on my own volition, things like meeting my young buddy Chuck Maguire for special Monday evening services at our church.

• When I was a preteen, Father Miller, our parish priest, "prophesied" to my mother that "Jimmy is going to be a minister one day." Keep in mind that, to Catholics in that day, the word "minister" did not refer to Catholic priests, but to Protestant clergy. Only several decades later, after I had been a Pentecostal minister for many years, did my Mom tell me about Father Miller's prophetic prediction.

• I began to drift from Catholicism in my early college years. I wasn't finding "life" in it. In retrospect, I see now that I had been simply following the prescribed rites and rituals, but did not truly have anything resembling a personal, saving relationship with Jesus Christ. By my sophomore year at Boston College, I had pretty much just stopped going to church. I still believed in God and in Jesus Christ, but it was more of a sincere intellectual consent to their existence than a personal relationship of faith and love.

• After college I spent a term in the Fall of 1965 in graduate business school at the University of Pittsburgh. I was still a non-attender at any church, but I hadn't lost my general faith in God. One moonlit night I was looking out my dorm window and had what I can only describe as a "spiritual experience." I had a very strong sensation that there was something "more out there" in a spiritual sense. The impression was very powerful, but I didn't yet know how to find the answer.

• Not entirely pleased with the curriculum at Pittsburgh, I transferred in January 1966 to the MBA program at Santa Clara University. It turned out to be a good decision, both naturally and spiritually. I enjoyed the MBA program there very much and graduated with my degree one year later. More importantly, I came back under the good influence of my brother Tom, who to this day remains a dedicated, practicing Catholic who is strongly committed to the Lord. Although I did not return to Catholicism, I was impressed and influenced by Tom's personal Christian faith — and also by the faith and demeanor of some Christian friends I met at Santa Clara. I did not at that time make a personal faith commitment to the Lord, but I had been positively influenced in that direction in that turning-point year (1966) in grad school at Santa Clara.

• In 1967 I was a newly-commissioned lieutenant in the Air Force and was sent to my first assignment at Elmendorf Air Force Base near Anchorage, Alaska. That turned out to be perhaps the major turning point in my spiritual journey. Because there in Anchorage in 1968 I met a young Christian college girl, who was known to all by her nickname "Mickey." She was the primary influence in leading me to a personal, committed faith relationship with Jesus Christ. I clearly saw, both in her words and in her exemplary character and lifestyle, that she had something on the spiritual level that I lacked and greatly needed. Over the course of six months, her testimony to me was having a powerful influence on my own mind and heart.

• In February 1969, I was on a temporary duty assignment from Alaska to McChord AFB in Tacoma, Washington. Mickey was in college not far away in Portland, Oregon, so I saw her often on weekends. One day in Portland she took me to a book store where I bought a Bible. Back in my quarters on base in Tacoma, I began to read the New Testament avidly every night. As Psalm 119:130 (NKJV) says, "The entrance of your words gives light; it gives understanding to the simple." That's what happened to me, there in the bachelor officers' quarters of McChord AFB in February 1969. As I devoured the Scriptures, truth filled my soul. I saw the reality of Jesus dying for our sins so that we might be saved from eternal judgment and spend eternity with him in heaven. Right there in my room I gave my heart and life to Jesus Christ and asked Him to forgive my sins and make me a child of God. I was filled with a sense of forgiveness and of the goodness of God. And at the foot of my bed, in what I can best describe as a vision in my mind's eye, I saw Jesus reaching out His hands to me. The immediate impression I had was twofold: (1) He was accepting me as His own, and (2) His outstretched hands seemed to be beckoning me to give Him all of myself and my life. From that day on, my life has never been the same!

• After a short-term Air Force assignment to New York, I spent the next two years at Mather Air Force Base in Sacramento. I continued to read my Bible avidly, in order to further my spiritual development. I attended a number of churches, but never quite found one that said to my heart, "This is the one to commit to." Then in March 1971 I completed my military service and moved back to Anchorage to begin what I thought would be a full career as an FAA air traffic controller.

• Back in Anchorage, I resumed my efforts to court Mickey, who by then had begun teaching school there. Eventually, that courtship succeeded, and we were married in 1972. By then we had become established in a great church, Abbott Loop Christian Center. Pastor Dick Benjamin became like a "spiritual father" to me in the things of the Lord. Pastor Benjamin was certainly, in the spectrum of my lifetime, the greatest positive human influence in my spiritual formation. I should mention that in April 1971, at a charismatic conference in Anchorage, I had received the baptism with the Holy Spirit, with the biblical evidence of speaking in tongues. That greatly influenced my direction into Pentecostal ministry in the years ahead.

• The years began to fly by! While still working for the FAA, I served as an off-staff, original faculty member of the Charismatic Bible College of Anchorage, which was established in January 1972. I left the FAA in early 1975 and began ministering full-time in the bible college, as a bible teacher and later as the Dean of the college. I was ordained as a bible teacher at Abbott Loop Christian Center in March 1975. Five years later I was also ordained at Abbott Loop as a pastor.

• That led to many of the subsequent years being spent in church planting and pastoring. First, in 1981, a team of Christian men and women were sent with me from Alaska to pioneer a Spirit-filled church in the suburbs north of New York City. I pastored that church from 1981 to 1985, when I turned the pastoral role over to my associate pastor and returned to Abbott Loop in Anchorage and resumed teaching in their Bible College.

• The Lord moved upon me to plant again. So in 1989 my family and I led another church-planting team to the Medford, Oregon, area. There we pioneered Medford Christian Center (later renamed South Valley Church), and I pastored it until retiring from full-time ministry at age 63 in May 2006. Since then I have given my ministry energies primarily to the expansion of this bible website in which you are now reading my personal testimony. And I occasionally do some substitute preaching and bible teaching when asked to do so by my pastor here in Oregon.

• After nearly 38 wonderful years together, my wife Mickey went on to her reward in heaven. She was a woman of great faith. For example, after seven years without children, she had been healed miraculously by the Lord of a diagnosed infertility condition. After that healing, beginning in 1979 she bore us four children, who are all adults now and all actively serving the Lord.

• God has been good to me! In my time as a widower He brought back into my acquaintance a widow who, with her husband then, had been part of our Alaska church in the 1970s. Acquaintance grew into friendship, then love, and in July 2016 Linda and I celebrated our fifth anniversary of happy marriage. "The blessing of the Lord, it maketh rich!" (Proverbs 10:22, KJV).

• I am thankful to God for every chapter in my life — a wonderful, secure childhood … teen and early adult years in New England … a time of spiritual searching and discovery in my young adult years … the privilege of serving the Lord for 31 years in full-time ministry … 38 blessed years with my wife Mickey and the family she bore to us … and now a renewal of love and joy with my wife Linda, with whom I am praying for at least 20 years of serving the Lord and each other together in these, our later years.

• Thank you sincerely for taking the time to read this memoir of my spiritual journey. My hope is that you have been encouraged and helped forward in your own personal walk with our Lord Jesus Christ.