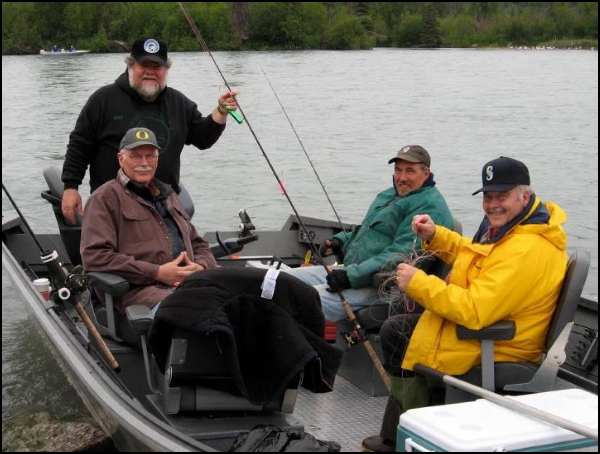 "Follow Me and I Will Make You Fishers of Men," Jesus Said
Keys to Effective Soulwinning

Summary:  Jesus chose a dozen men. Some were fishermen. One was a tax collector. As far as we know, not one of them was a trained religious worker. Jesus simply said, "Follow Me." They did and became effective "fishers of men" — that is, soulwinners. Jesus can make you too a successful fisher of men's souls.

As Jesus was walking beside the Sea of Galilee, he saw two brothers, Simon called Peter and his brother Andrew. They were casting a net into the lake, for they were fishermen. [19] “Come, follow me,” Jesus said, “and I will make you fishers of men.

•• Repeated in .
•• Many sermons have been preached from these two verses. But the longer account is in Luke.

•• “Follow me and I will make you fishers of men.”
•• Jesus said this after giving them a dramatic natural example.
•• What lessons can we draw from these bible accounts to help us become effective evangelistic fishers of men, successfully drawing in nets full of souls to Jesus?

...Jesus was standing by the Lake of Gennesaret, with the people crowding around him and listening to the WORD OF GOD...

(1) Men and women will be drawn to the WORD of God.

• Billy Graham often declares: “The bible says...”
• I was personally born again after a two-month time of reading the Bible.
•   “How can they believe in the one of whom they have not heard?”

• Jesus knew this, so He preached the Word of God.

When he had finished speaking, HE SAID to Simon, “Put out into deep water, and let down the nets for a catch. [5] Simon answered, “Master, we’ve worked hard all night and haven’t caught anything. But BECAUSE YOU SAY SO, I will let down the nets.”

(2) LISTEN for and OBEY the LORD’S LEADING.

•• “Follow ME and I will make you fishers of men.”
•• Gathering in the catch is far too difficult for me to do or to figure out. That’s why I need Jesus to make me an effective fisher of souls.
••   “At thy word I will let down the net.”
••   “The Spirit told Philip, ‘Go to that chariot and stay near it.’ ” And a great salvation followed.
•• To draw in the net, we need to pray daily, “Jesus, MAKE me a fisher of souls. Tell me how, when, and where to cast the net.”

Simon answered, “Master, we’ve worked hard all night and haven’t caught anything. But because you say so, I will let down the nets.”

(3) PERSEVERE! Don’t give up casting your nets.

•• I know of a lady in Portland, Oregon, who prayed 56 years for her husband to be saved, and her prayers finally prevailed!

• My wife-to-be (now my lovely wife of 33 years!) persevered for six months in witnessing to me before I accepted the Lord as my Savior.
• You may need to “walk the walk” and “talk the talk” for years to win that neighbor or family member to Jesus Christ.

When they had done so, they caught such a large number of fish that their nets began to break. [7] So they signaled their partners in the other boat to come and help them, and they came and filled both boats so full that they began to sink.

(4) Drawing in the harvest is a CORPORATE work, a “BODY MINISTRY.”

•• The evangelist can’t do it alone.

• Billy Graham gets many churches following up on the converts won during his crusades.

•• You may be the “partners” of those who cast the soulwinning net.

• Be willing to “come and help” with the harvest.
• Be willing to make new friends.
• Some win the lost; some train and nurture the saved.
• The Great Commission is a continuum. And you are part of it, somewhere on that continuum.
• Some cast the net; some row the boat. All contribute to the catch.

He said, "Throw your net on the right side of the boat and you will find some." When they did, they were unable to haul the net in because of the large number of fish.

(5) Sometimes the catch is on the “OTHER SIDE”, requiring a CHANGE in METHODS or STRATEGY.

•• A church of my acquaintance started a drama ministry in 1995, leading to 1,000 “decisions” for the Lord! A new method for that church brought a harvest of souls.
•• The Protestant “Missionary Movement” has been alive and well only about the last 200 years of the five centuries since the Protestant Reformation. William Carey and some of his peers decided to throw the evangelistic net on the other side of the boat and to move into untouched regions with the Gospel. And great success followed.

So Jesus wants to make us “fishers of men.” How?

1. Sow the Word of God. “Preach the word...”
2. Listen for and obey the Lord’s leading to cast the net.
3. Persevere in casting your net for souls. Don’t give up.
4. “Body ministry” is needed — each of us doing his/her part.
5. Remain flexible and willing to cast the net “on the other side” as the Lord directs.

A related sermon outline of interest to soulwinners is Catching Plenty of Fish.