Plenty of Fish Caught by "Fishers of Men" and Heaven Bound

Summary: A wildly successful night catching king salmon in Alaska reminded me of some fishing ventures from 2,000 years ago. 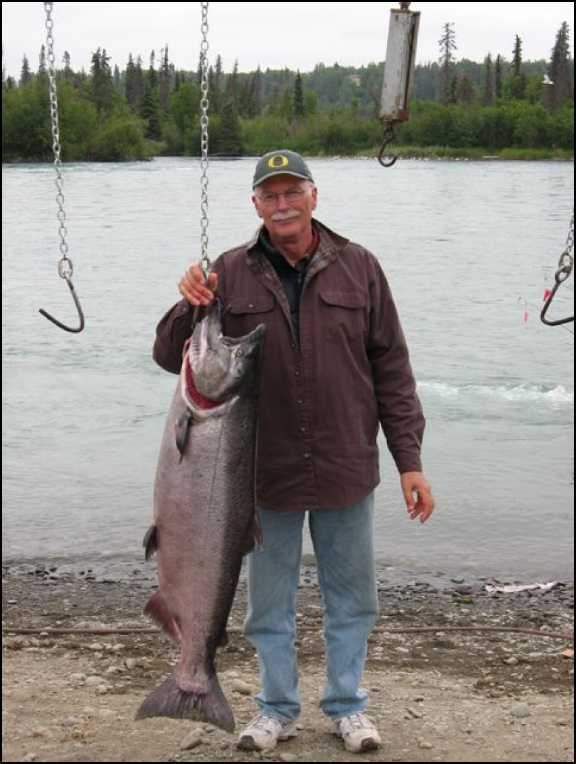 Alaska’s remote Goose Creek was deserted as my friend Jim and I arrived with four excited children. We were early, a full five hours before the midnight opening of the king salmon season. We propped up our fishing rods and spaced them a few feet apart on that wilderness river bank. That reserved the prime fishing spots for the midnight opening.

Looking into the clear water of the pool at the bend of the river, we saw fish — plenty of fish! Large king (chinook) salmon were thick in the pool. After what seemed like an eternity, the midnight opening arrived. Casting in the still-bright Alaska summer night, we struck it rich! Within 30 minutes we had three large king salmon on the bank. More cries of “Fish on!” could be heard up and down the river.

A thrill-of-a-lifetime fishing trip? For sure! Interestingly, fishing imagery occurs frequently in the New Testament of the bible. In their own fish-catching ventures, Peter and his fisherman friends used nets, not a rod, reel, and line as we did on that remote Alaskan river. But how and what these biblical fishermen did offers insights for us in winning souls for the Lord.

Today we will focus our attention on two portions of Scripture: and John . (It would be helpful for the internet reader to take a few minutes now and read those verses.)

•• They had fished all night without success. They were ready to give up. But Jesus encouraged them to make one more cast of the net.
•• Drawing in the net for souls is a lifelong process. I know of a lady in Portland, Oregon, who saw her husband saved after 56 years of praying for his salvation.
•• We have to “walk the walk” and “talk the talk” in a godly way before family and friends for a lifetime. In that space of years, some will come into the kingdom.

"Master, we've worked hard all night and haven't caught anything. But because you say so, I will let down the nets."

(2) Obedience to the Lord's Leading

• Jesus is a great "fish finder"! To borrow the old saying, there are "plenty of fish in the sea" — spiritually speaking. That is, the entire population of the earth is bound for heaven or hell and needs only a "fisher of men's [souls]" to point them to the Lord Jesus and, through faith in Him, to eternal life in heaven. And Jesus knows where every lost soul is and whether they are ready to be "caught" in the Lord's harvest.

•• Gathering in the catch is far too difficult for me to do or to figure out. That’s why I need Jesus to guide me and make me an effective fisher of men.
•• []  “At thy word I will let down the net.”
••   “The Spirit told Philip, ‘Go to that chariot and stay near it.’ ”
•• To draw in the net, we need to pray, “Jesus, make me a fisher of souls. Tell me where to cast the net.”

For he and all his companions were astonished at the catch of fish they had taken.

Simon Peter, Thomas (called Didymus), Nathanael from Cana in Galilee, the sons of Zebedee, and two other disciples were together. "I'm going out to fish," Simon Peter told them, and they said, “We'll go with you.” So they went out and got into the boat, but that night they caught nothing.

•• “Body ministry” with each doing his specific task.There were at least seven of them fishing in the boat that night.
•• Some cast the net; some row the boat. All are needed! All contribute to “the catch.”
•• The Great Commission is a continuum of many people over many centuries. You’re on that continuum somewhere.

When they had done so, they caught such a large number of fish that their nets began to break.

Simon Peter climbed aboard and dragged the net ashore. It was full of large fish, 153 [of them]...

•• The church I attended in Alaska had grown to 200 people in twelve years. Then in just one more year it grew to 400, and not much later to 800! And many of those coming in were new converts, not just church swappers and hoppers. On occasion, God will grant sudden, large harvests of souls.

• As happened to Peter and his partners in the boat, sometimes God will put lots of fish in a short time into the soulwinning nets cast by "fishers of men".

•• The apostle Paul found himself shipwrecked on an island populated by heathen people. No matter. The apostle boldly went and successfully ministered healing to the island chief’s father. This became a catalyst for a major healing revival on that island.
•• Expect these occasional “bumps” in normal growth.

He said, "Throw your net on the right side [that is, the other side] of the boat and you will find some." When they did, they were unable to haul the net in because of the large number of fish.

(5) Sometimes the catch is on the “other” side of the boat — that is, a change in methods or strategy.

•• Abbott Loop Community Church offered to the public an evangelistic drama ministry last week [1995]. The result? — 1,000 decisions for Christ! A “new” method. Be open, be flexible, within bible guidelines, in casting your net for souls. Not often, but occasionally, you will find large catches of fish in the nets with just a few casts into new waters.
•• The Protestant “Missionary Movement” is only 200 years old. Yet Protestant churches arose fully five centuries ago, but were seldom involved in missions work for their first three centuries. Then William Carey and others decided to throw the net on the other side of the boat, and these fishers of men drew in nets full of new converts in foreign lands.

So the net is drawn in, full of repentant souls, and the kingdom of God is populated when:

1. Christians persevere in casting the net.
2. Christians seek to hear the specific voice and leading of the Lord.
3. “Body ministry” is functioning — each doing his or her part.
4. Faith is growing for large catches of souls.
5. We are willing to be open and flexible to the Lord leading us in different ways from our past comfort zones.

A related sermon on effective soulwinning is our Fishers of Men.